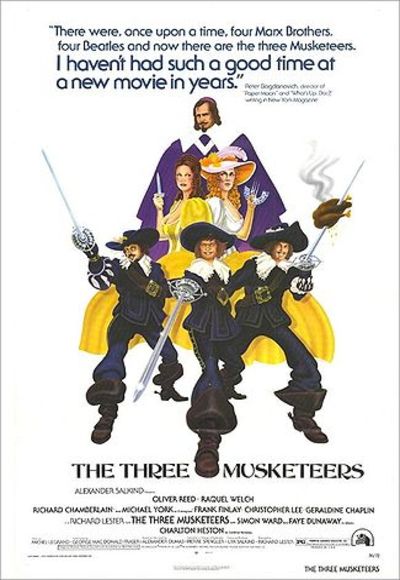 The weekend of July 11 was dry and barren as far as interesting movies were concerned.  I spent most of the weekend with electricians and other technicians swarming over my house; I would have preferred an air-conditioned theater, but that was not to be.  I had no interest whatsoever in Warcraft;  the film had been over-advertised for months and, from the first, I recognized it as third-rate Tolkien.  Films based on video games tend to very low on my list of acceptable genres.

After the technicians had retreated from my house, I consoled myself with the 1970s version of The Three Musketeers.  I had not watched my DVD in several years, and I was pleased with how well the film has withstood the decades.  In many ways, Richard Lester caught the essence of the original Dumas novel, but he also added a slapstick element that is hard to find in the original novel.  Michael York, Oliver Reed, Charlton Heston, Richard Chamberlain, Christopher Lee, and Raquel Welch were effective in their roles.  (I confess that I still have some partiality for Vincent Price’s version of Cardinal Richelieu in the Gene Kelley version; Price was much nastier than Heston.)

I also watched the sequel, The Four Musketeers, which completed the original story. My memory is that both films were shot at the same time and cut into two films because of the long running time.  A few years later, there was an attempt at filming the second novel, Twenty Years After; the less said about it, the better.  It came nowhere near the original novel.

There have been many, many versions of the Musketeer story, but this is probably the best.  George Macdonald Fraser’s script did much to de-romanticize the swashbuckler genre and came close to explaining why the French needed a revolution.