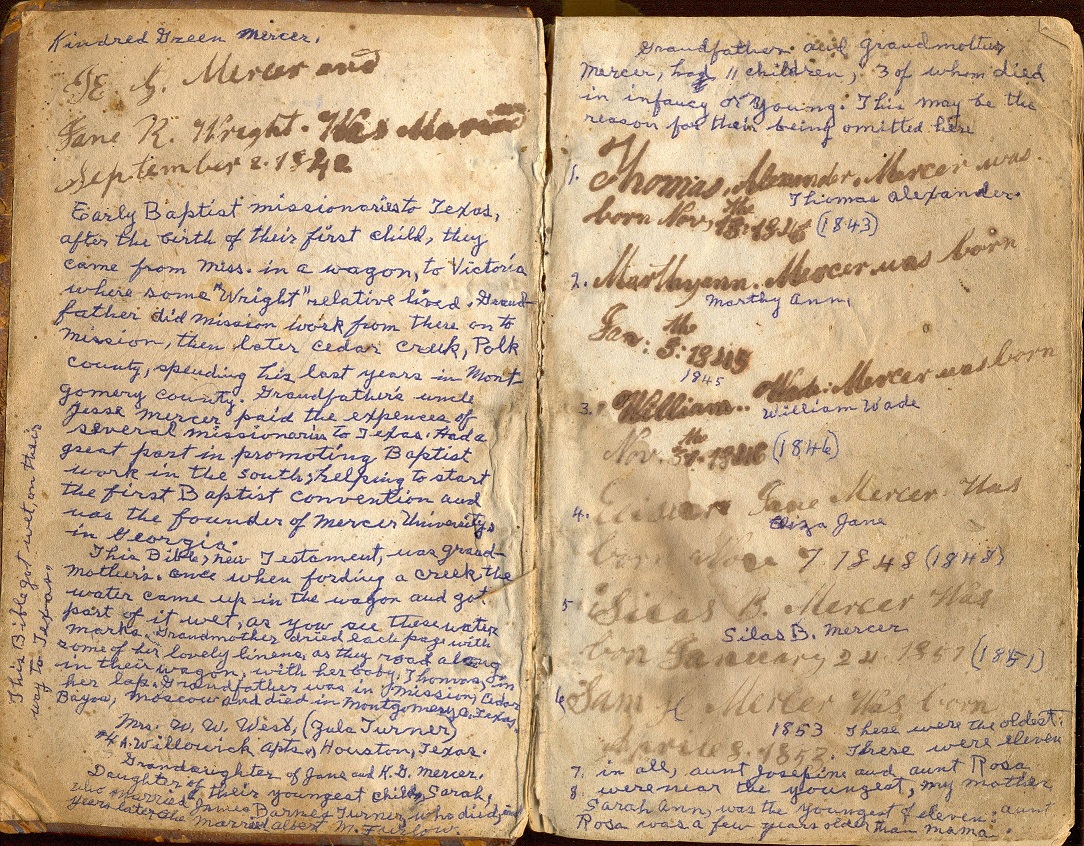 The New Testament of Our Lord and Saviour Jesus Christ.  New York: Stereotyped by A. Chandler for  “The American Bible society”, 1829.    Bible B06.05.

The 1829 Testament brought to Texas was left to the youngest daughter, Sarah. Her daughter, ZulaTucker West, continued to use the Testament. A Sunday Schoolteacher at Houston’s First Baptist Church, Zula loved to read her grandmother’s Testament to her teenage class, feeling her grandmother was still witnessing for Christ when her Bible was read. God’s plan of salvation given so fully in John 3:16continued to speak to generations of Texans. Zula asked that her children give her grandmother’s New Testament to Houston Baptist University. She wrote its history inside the cover and concluded, “Now will you dear reader bow in prayer, thanking God for the Holy Spirit’s ever-growing, the spread of this gospel in Texas and throughout the world.”

Other hand written notes explain history of some of the people connected with this Bible.  After notice of marriage of Kindred Green Mercer to Jane Wright:

“Early Baptist missionaries to Texas, after the birth of their first child, they came from Miss. In a wagon, to Victoria where some “Wright” relative lived.  Grandfather did mission work from there on to mission, then later Cedar Creek, Polk County, spending his last years in Montgomery County. Grandfather’s uncle Jesse mercer paid the expenses of several missionaries to Texas.  Had a great part in promoting Baptist work in the South; helping to start the fist Baptist convention and was the founder of Mercer University in Georgia.

“This Bible, New Testament, was grandmother’s.  Once when fording a creek the water came up in the wagon and got part of it wet, as you see these water marks.  Grandmother dried each page with some of her lovely linens, as they road [sic] along in their wagon, with her baby, Thomas, on her lap. Grandfather was in Mission, Cedarbayou, Moscow, and died in Montgomery, Texas.

“Grandfather and grandmother Mercer had 11 children, 3 of whom died in infancy or young.”

“Mama’s parents Rev. Kindred Green Mercer’s names and their part in the early Baptist work in Texas, who came to help spread the gospel, being sponsored by his uncle. Jesse Mercer. And for or more others as missionaries to Texas, as soon as the way was open for more intensive Baptist Mission effort, since at the battle of San Jacinto, freedom was given to this vast area to preach our simply gospel the “Good News” from God’s Word”