As the 20th century was coming to a close and the world faced a new millennium, St. John’s Abbey and University commissioned a completely handwritten and illuminated Bible to celebrate the beginning of the new millennium. This was the first Bible commissioned by a Benedictine Order since the invention of the printing press in the 1400’s, over 500 years ago. Master calligrapher Donald Jackson, the official scribe and calligrapher of Queen Elizabeth II, oversaw the project. Commissioned in 1998, the final pages were completed in 2011.

A limited Heritage Edited of 299 copies replicates the beauty of the original.   Houston Baptist University is one of five institutions in Texas which has The Heritage Edition on display.  We’ve included some of the beautiful illuminations from The St. John’s Bible, all of which are designed to encourage meditation on the Scriptures themselves.

The entire work is divided into seven volumes:

This illumination shows the seven days of creation as God brings order out of chaos.  At the bottom left panel are the Hebrew words tohu wabohu, meaning “formless and void.”  The gold throughout shows God intervening in the chaos and ordering the universe.  The ribbon of gold in Day 1 corresponds to “Let there be light.”  Day 3 is made of satellite photos of the Ganges delta.  For man’s creation on Day 6, artist Donald Jackson used images from aboriginal rock painting in Australia.  A fragment of a coral snake can be seen at the bottom of Day 6, reappearing in Genesis 3 and Revelation, where it is vanquished, showing the unity of the Bible’s story.  Day 7 is brilliant gold, showing the peace, glory, and rest of God after creating the universe.

The raven, a creature of land, sky, and sea, flies across the scene. Birds are sometimes messengers in the Bible (as in stories of Noah and Elijah), and in legend, a raven brought God’s message to St. Benedict, patron of the Benedictine monks of St. John’s Abbey, who commissioned this work.

In the midst of His creation, God created a special garden, Eden, and there He placed man—Adam and Eve. All was very good in this garden, and Adam and Eve had but one prohibition: they were not to eat from the tree of the knowledge of good and evil.

The Garden of Eden on the left is framed with a golden border, creation spilling over in some sections. All was very good, and creation was abundant and fertile. The wildness and color of the picture reflects upon the unbridled freedom in the pre-fall state. In the center, to the left of the man and the red monkey’s face, is a fraction of a mandala—a circular image in Christian, Buddhist, and Hindu spirituality.  Mandalas occur repeatedly throughout the St. John’s Bible.  The coral snake represents the serpent which tempted Eve, and it appears coiled like a broken necklace and slithering down Eve’s face in the image of the fall on the right.

The faces of Adam and Eve were inspired from photographs of the Karo tribe in Ethiopia (archaeologists and anthropologists suggest that man first came from an African region). The couple’s faces bear a disconnect through their paint and grimaces. For shame and distrust they neither look into each other’s eye, nor God’s, nor the viewer’s as they face the weight and punishment of sin and exile. Thankfully, the story is not over, as the next large image to come portrays God’s covenant relationship with Abraham and promise of blessing to come. 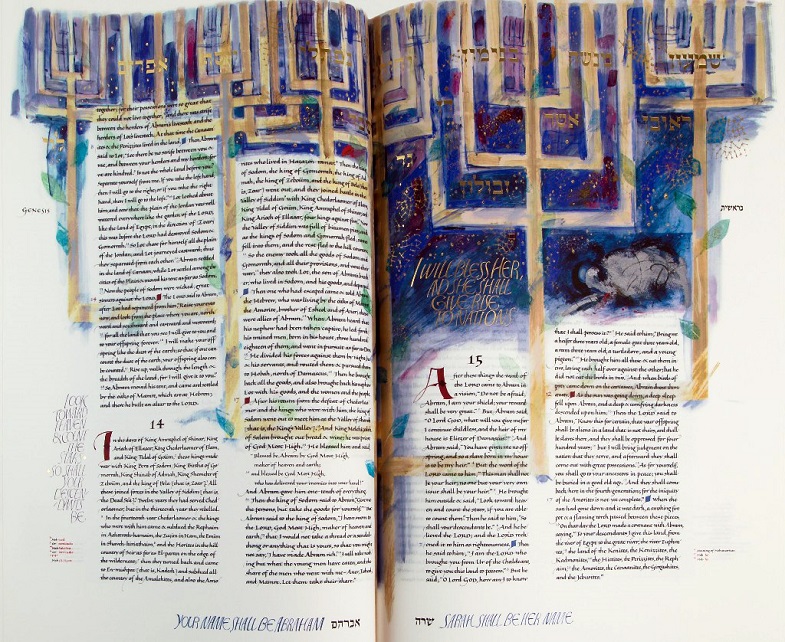 God made a covenant with Abraham to give him a land, descendants numbered like the stars of the sky, and a nation which would be a blessing to other nations.  In this full page illustration, the menorah, a prevalent sign in Jewish worship, stands as the covenantal family tree for Abraham and Sarah (their names in Hebrew at the base). The names of the twelve sons of Jacob are written in Hebrew, interspersed throughout the branches.  A similar menorah family tree is used at the beginning of the Book of Matthew to record the line of Jesus from Abraham.

Curiously, this menorah also has stamped leaves growing off of it, foreshadowing the palette used in the Pauline letters and demonstrating that this line of faith is alive. Stars stamped in the sky background represent the promise of descendants to Abraham, and these are the same star stamps used in the beginning of Luke’s Gospel, at the scene of the birth of Christ. These repeated images form a connection for the reader between the books and stories of the Bible, indicating its continuity and God’s fulfillment of His promises. Finally, in the right corner of the art work sits a greyish, black blur. This is the ram which stood in Isaac’s place as a sacrifice, allowing the tree of descendants to flourish and foreshadowing the Passover lamb and Jesus’ ultimate, substitutionary sacrifice.

This illumination shows the wonder of Jacob’s dream of the ascending and descending angels. The abstract gold angels ascending and in attendance are accompanied by fragments of delicate butterflies’ wings, an allusion to the wonders of God’s creation. At the bottom is Jacob’s response to the dream, “And he was afraid and said “How awesome is this place.”

The Ten Commandments summarize the whole of the Law and Christ’s teachings. For centuries they have stood as fundamental principles in law courts alongside Roman and Anglo-Saxon law. Moreover, these 10 Commandments are laws which reflect the very nature and character of God, laws rooted in Israel’s past.

The words and letters stand out in this image. Solid in gold, the Lord describes His being. Then He progresses with the Decalogue, but as the words near the end, they break into fragments and ultimately fall off the image. This can be interpreted in two ways:

On the top half of the image, behind the golden words of God, there are four panels:

The Lord led Israel out of Egypt, across the Red Sea, and through the wilderness. The Lord was with Moses and Aaron at every step. Yet, Moses disobeyed God’s command to speak to a rock to produce water, but struck the rock.  The Lord reprimanded him, saying, “Because you did not trust in me, to show my holiness before the eyes of the Israelites, therefore you shall not bring this assembly into the land that I have given them.”

The illustrated text here reads “you did not trust in me.” Viewing this, one is drawn almost to feel and share in the sadness and weight of both Yahweh and Moses. The Lord’s anger and disappointment are seen in the broken text—black marring of a golden background. The consequence and stain of sin is realized.   One can look at these words in the illustration and imagine them visibly emanating from the mouth of the Lord. Yahweh is not a God to be trifled with.

Though God provided food and water for Israel in the wilderness, Israel tired of God’s provision and detested the wilderness. Because the Israelites blamed God, He brought to their camp venomous serpents which bit and brought death to many. When the people repented, Yahweh instructed Moses to craft a bronze serpent and set it high upon a pole in the midst of the people. Anyone who was bit had only to raise up his eyes to the image, and he would be healed.

The artwork representing this story is broken and fragmented—like the world, like the people.  The brazen serpent foreshadows Jesus, who was detested and despised among the people, being lifted up for the salvation of the same people. The image crawls to the right and up, thick and dead to thin and alive, perhaps representing the progression of the peoples from sin and punishment to the necessity to rely once again on God.