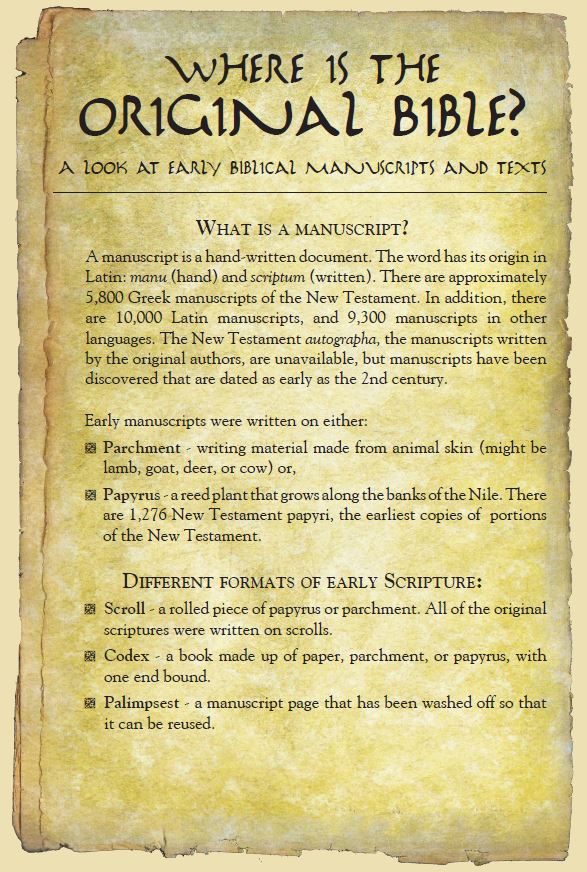 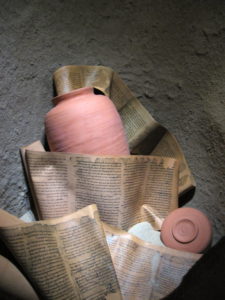 DeadSea Scrolls found in the Qumran Caves.  The scroll was written on seventeen sheets of parchment, connected into a scroll.  Differences between this scroll and the later Masoretic text are mostly grammatical and spelling differences.

Both this scroll and the Codex Leningradensis are open to Isaiah 40:8: “The grass withers, the flower fades, but the word of our God will stand forever.” (ESV) Although the manuscripts were written over 1000 years apart, the Word of God had never changed.

Codex Leningradensis is the oldest Hebrew manuscript of the entire Old Testament. This codex was found in Egypt and is now at The National Library of Russia in St. Petersburg (formerly known as Leningrad).

The early Hebrew manuscripts did not have vowel pointings, chapters, or verses.   A group of scribes called the Masoretes, who worked in Tiberias and Jerusalem in Israel between the 5th and 10th centuries, added vocalizations (vowels), accents, and a textual apparatus to the Hebrew text. The version was finalized by Hebrew scribe Aaron ben Asher in the early 10th century. 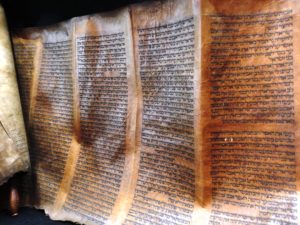 This scroll from the Cairo Genizah was discovered by Jewish scholar Solomon Schechter in 1892. A genizah (Hebrew for “hiding

place”) is a depository for sacred Hebrew books that are no longer usable.  Since the books contain God’s sacred name, they cannot be simply thrown away.

Manuscripts can be dated by the style of script used.   The earliest New Tesamnet mansucritps were in scripto continuo, a style of writing without spaces in between words.  (continuous script).  Uncial, a script with majuscule (capital) letters which was more curved than earlier Greek writing styles, was used during the 4th-8th centuries. Cursive is a script where the author was able to write with fewer lifts of the pen. Miniscule, script with smaller letters which take less space and time, began to be used in the 9th-10th centuries.  There are over 2500 miniscule New Testament manuscripts.

Codex Vaticanus (“Book from the Vatican”) is one of the earliest complete manuscripts of the Bible.  It includes the Greek translation of the Hebrew Scriptures (the Septuagint or LXX) as well as the Greek Christian Scriptures, the New Testament.  Scholars speculate the manuscript was written in Egypt, possibly one of the 50 complete Bibles commissioned by Constantine the Great.  Written on vellum or calf’s skin, the codex has been in the Vatican Library at least since 1475.

Codex Washingtonianus is the third oldest Greek manuscript of the Gospels. The manuscript was brought to the United States from Egypt by Detroit businessman Charles Lang Freer in 1906, and is now a part of the Freer Collection in the Smithsonian Institution in Washington DC. The book is open to Mark 16:12-17 which includes the “Freer Logion,” a short 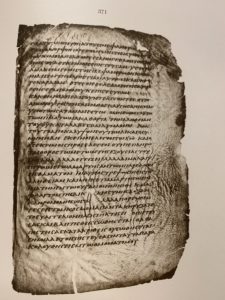 paragraph not found in any other Greek manuscript.

And they excused themselves, saying, “This age of lawlessness and unbelief is under Satan, who does not allow the truth and power of God to prevail over the unclean things of the spirits. Therefore reveal thy righteousness now” – thus they spoke to Christ. And Christ replied to them, “The term of years of Satan’s power has been fulfilled, but other terrible things draw near. And for those who have sinned I was delivered over to death, that they may return to the truth and sin no more in order to inherit the spiritual and incorruptible glory of righteousness which is in heaven.

This is a miniscule of Luke 23:8-23,25 from a late Byzantine codex of the Gospels. The majority 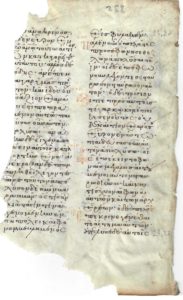 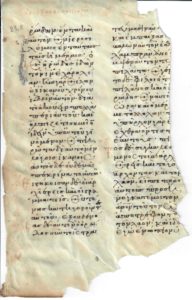 dex is now in Bibliothèque nationale de France in Paris. The manuscript was used for many important printed Greek New Testaments.  Catalogued as Codex 28.78 in Gregory Aland’s catalog. 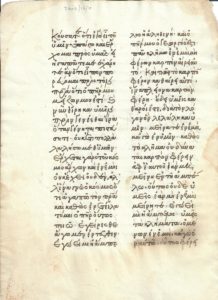 A Lectionary is a book with Scriptures organized for reading on specific days.  This lectionary was used in the Orthodox church for Passion Week. It is the first lesson of the Twelve Accounts of the Passion which was read on Holy Friday. The lesson begins with a title and illuminations made with brown ink: “The reading is from the [Gospel] according to John.”

Printer Robert Estienne, known by his Latin name Stephanus, printed four editions of the Greek New Testament.  This third edition became normative for most biblical translations into the twentieth century.

Stephanus’ fourth edition of the Greek New Testament, printed in 1551, was the first New Testament with verse numbers. 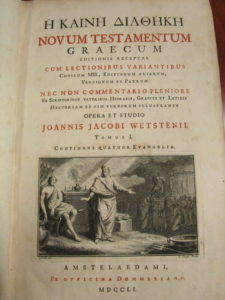 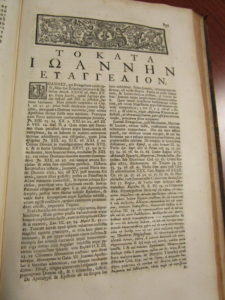 the manuscript labeling system still used today. Uncials are represented by Roman capital letters (A, B, C, …) and minuscules are represented by Arabic numerals (28, 29, 30, …). Wettstein examined many Greek manuscripts, various early versions, as well as the writings of the Church Fathers, in order to provide an accurate textual apparatus. He even examined miniscule 28, which is on display in this exhibit. 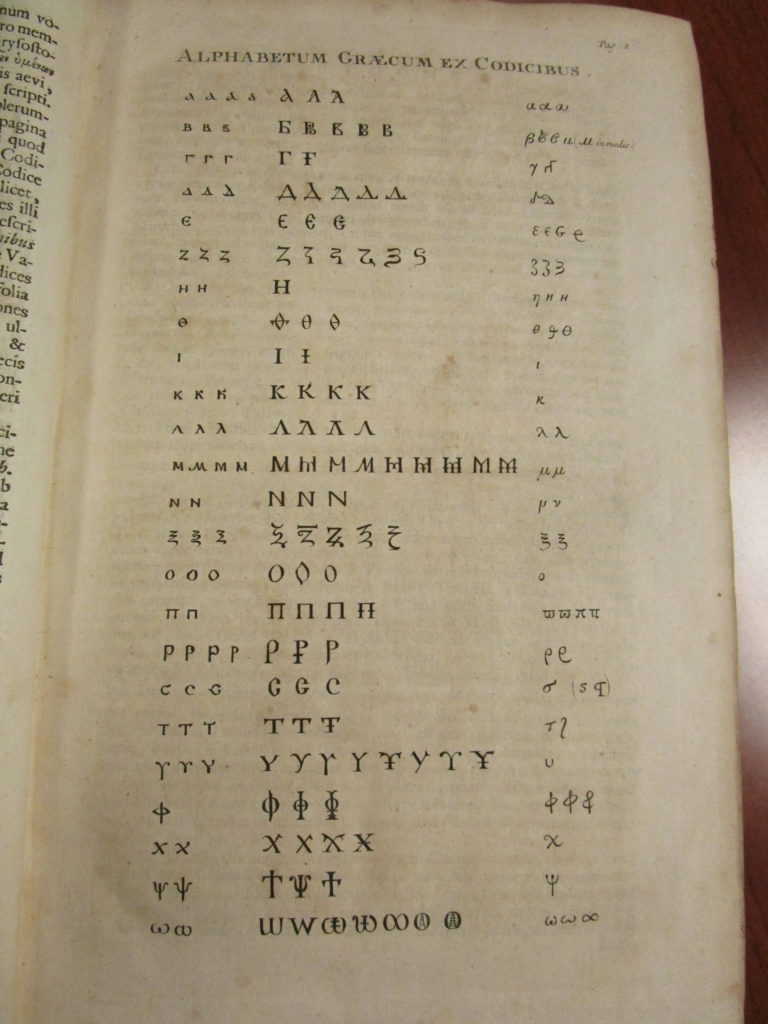 The New Testament in Greek and English. Daniel Mace, 1729. 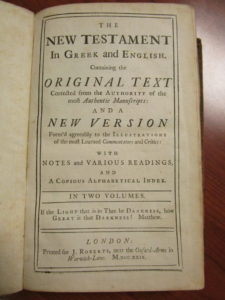 Daniel Mace was a Presbyterian minister who created the first English and Greek diglot Bible. His Greek New Testament is one of the first to depart in a significant way from the Textus Receptus and create a text-critical edition. His text-critical method of handling the biblical manuscripts anticipated modern scholarship by one hundred years. His English translation also departs from the traditional English translations and uses colloquial expressions like in Luke 7:40, which can be seen on display. 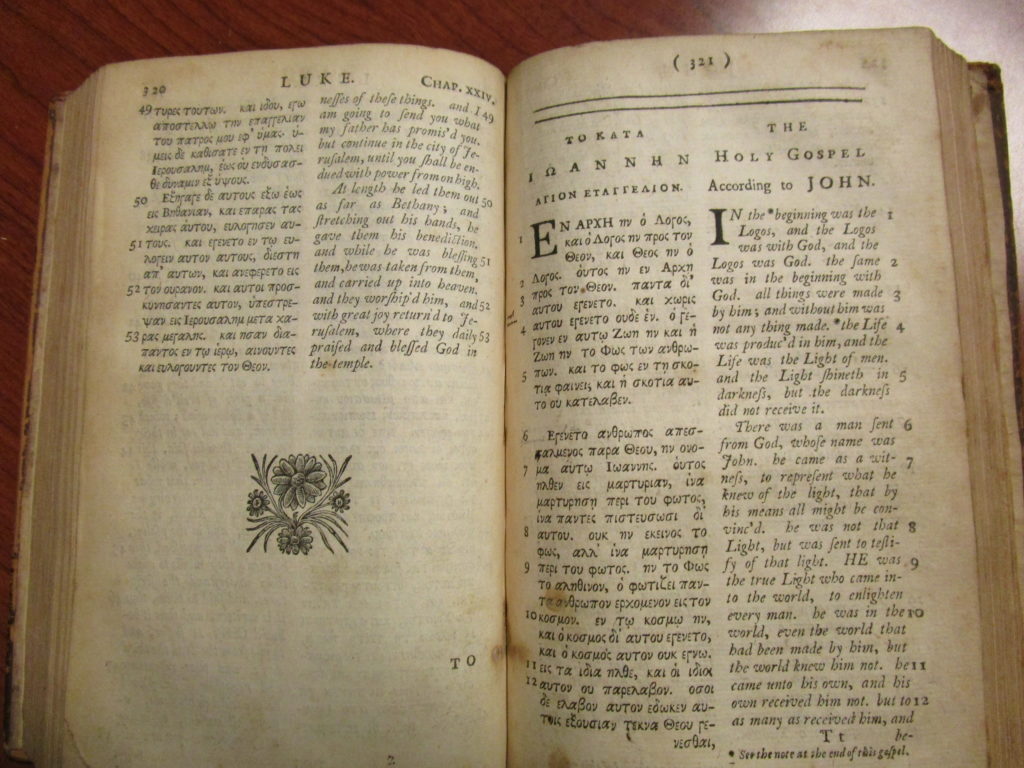 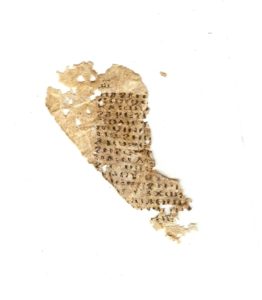 This is a Sahidic Coptic translation of the Septuagint on parchment.  The Bible was being translated into Coptic as early as the second century.  Coptic was the last stage of the Egyptian language dialect before the Islamic conquest.  Though the word Coptic originally referred to Egyptians in general, after the Islamic conquest, the term came to refer specifically to Egyptian Christians, a minority in Egypt who often suffer persecution today. 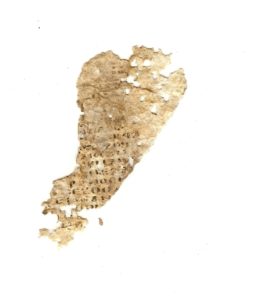 Sahidic Coptic was the language of the southern part of Egypt.  A translation of both the Greek Old Testament and the New Testament was created for the Jewish and Christian population that lived there. Today, about 10% of Egyptians identify themselves as Coptic Christians,  and many still use the Coptic language for their liturgy.

Codex Argenteus is a 6th century manuscript of Ulfilas’ Gothic translation of the Gospels. Ulfilas was a bishop and missionary to the Goths, a Germanic people. He created the Gothic alphabet and translated the Bible from early Byzantine manuscripts in the 4th century. Ulfilas was an Arian. However, his Arian beliefs only clearly influenced one verse in his translation, Philippians 2:6.

Codex Argenteus (“Silver Book”) was likely made for the Ostrogothic King Theodoric the Great. It was made with purple stained vellum and the text was written with silver and gold ink.

The Lindisfarne Gospels were created in Lindisfarne, England in honor of St. Cuthbert, a medieval English monk and bishop. The text is a manuscript of St. Jerome’s Latin translation, the Vulgate. This particular leaf is known as the Chi-Rho page. Chi-rho (ΧΡ) are the first two Greek letters of the Greek word Christos. Τhis abbreviation precedes Matthew 1:18 where Matthew’s narrative on the life of Jesus begins. 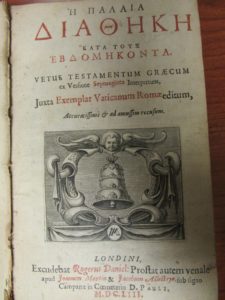 The study of the Septuagint is important in that it is the primary Old Testament text from which many of the New Testament authors quote, and it is helpful in textual criticism in comparing with Hebrew manuscripts such as the Dead Sea Scrolls and Codex Leningradensis. 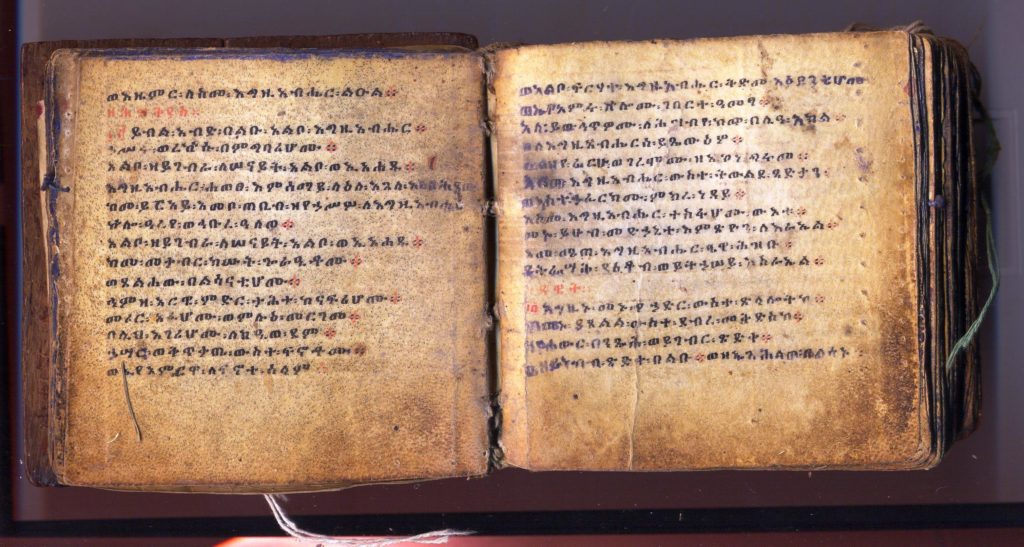 The Ge’ez or Old Ethiopic Bible was translated in Ethiopia during the 5th or 6th century by monophysite monks, who had fled Byzantine rulers disagreeing  with their views on the nature of Christ. The Garima Gospels, Ethiopic Gospels dated to the 6th century, are the earliest known biblical manuscripts with paintings. The Ge’ez translation is helpful for textual criticism in relation to its similarity to the Byzantine family of manuscripts.