This beautiful room is modeled after the Pennsylvania Supreme Court room that occupies the first floor of Independence Hall. Prior to its fame as the birthplace of America, Independence Hall was known as the Pennsylvania State House, housing all three branches of the Colonial Government. The colonial legislature met across the hall (in the Assembly Room), the Governor occupied the upstairs, and the Colonial Court met in this room.

After Independence, the judicial branch continued to meet here, this time as the Pennsylvania Supreme Court. The government of Pennsylvania moved from Independence Hall in 1799 when the state capital was moved from Philadelphia to Lancaster. With our version of this room, we honor the American judicial system and commit to educate the next generation of lawyers and judges who will defend the Constitution and uphold the rule of law in the pursuit of liberty and justice for all. 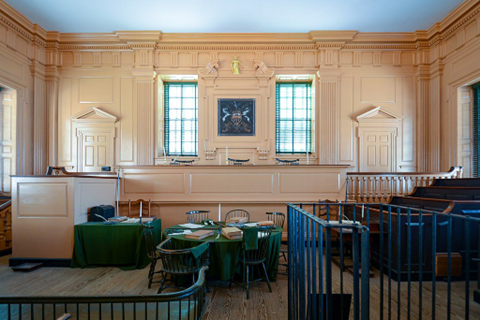 Previous:
« The Assembly Room
Next:
The Staircase and Window »
Self-Guided Tour Overview
Center for Law & Liberty