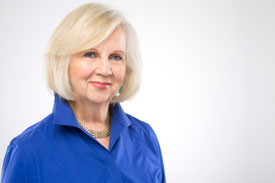 Sharon Saunders serves as Vice President for Advancement and University Relations at Houston Baptist University, where she oversees all facets of fundraising initiatives including Seize the Moment, the University’s capital campaign.  She is responsible to the President for strategic direction and leadership for all advancement and development areas, as well as alumni relations.  In addition, her responsibilities include overseeing University events and conferences, as well as special projects and initiatives.  She serves as a member of the President’s Executive Council leadership team and numerous institutional committees.

Saunders also serves as the Executive Director of The Guild, a group of civic-minded, dedicated Christian women of many denominations whose mission is to serve the President and the University.  Since 1995, The Guild has contributed more than $2 million to HBU for graduate scholarships in education and theology, special projects, and The Guild Institute in Christian Family Studies.  The Guild has awarded 60 endowed scholarships as well as 324 annual scholarships.  The Guild Institute in Christian Family Studies was launched to support projects, lectures, and activities that strengthen the Christian family.

In addition, Saunders oversees the American Museum Society.  An organization committed to supporting the HBU Museum of American Architecture and Decorative Arts.

Saunders was honored as one of “Houston’s 50 Most Influential Women of 2015” by Houston Woman Magazine.  She was recognized for her work at HBU, as well as her work in other organizations and community endeavors.

She was named honoree of The Guild’s 2015 Silver Tea in recognition of her leadership to The Guild and the University and her commitment to Christian higher education.  The Guild also recognized her service with the naming of the Sharon E. Saunders Endowed Scholarship in Graduate Education.  In addition, Saunders has received the University’s highest awards – the Mayfield Outstanding Staff Award and the Hallmark Award, which recognized her work with and contributions to the HBU Alumni Association.  She has served in a number of capacities during her tenure with the University, including serving as Chief of Staff to the President, as well as overseeing admissions, marketing, public relations, and the editor of a variety of University publications.

Saunders represents the University in multiple venues through both internal and external organizations.  She has served on a number of professional boards and has held numerous leadership positions, including her service as President of the Texas Baptist Public Relations Association and President of the Association of Communicators in Baptist Education.  She also served on the Board of Directors of Fort Bend Christian Academy and has served on the board of the Fort Bend Independent School District Education Foundation.  Additionally, she has served on the board of the Women’s Fund, where she is a lifetime member, and as a member of The Greater Houston Women’s Chamber of Commerce.  She also serves on a community board for the City of Sugar Land.