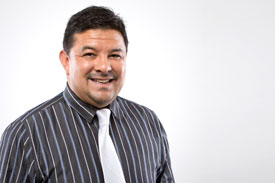 Dr. Estrada was honored with the Opal Goolsby Presidential Award for Teaching Excellence in 2008 at Houston Baptist University. He served as HBU’s nominee for the Piper Professor Award in 2012. The Piper Professor Award is an annual Texas statewide competition in which each university chooses one professor to represent the school. Dr. Estrada was the Texas Foreign Language Association University Spanish Teacher of the Year 2012.  He was appointed President of the HBU Faculty Assembly in the academic year of 2016/2017.

His academic interests include: attending and presenting papers in conferences that deal with topics of contemporary Latin-American Literature and Culture. He is certified in Secondary Education Spanish in Texas and in New Mexico. In addition, he is a certified principal for the state of Texas. He has taught at the High School level and has been Department Chair of Languages. Dr. Estrada’s teaching philosophy is to integrate pedagogical applications to the language experience of the students learning Spanish. He has taken students to Central Mexico and the north of Spain.

Dr. Estrada has received a Fellowship for Minorities from the State of New Mexico in 2000, the Conexiones Teaching Abroad Excellence in 2003, and the Service to the Department of Spanish and Portuguese Award in 2005 from the University of New Mexico.

In 2008, he was selected to become a member of a commission composed of six teachers from different states of the United States. The commission established the grading rubric for the current Spanish Literature Placement Exam given by the College Board in numerous high schools across the nation. Dr. Estrada is currently the regional vice-president of Alpha Mu Gamma a national honors college society in Arkansas, New Mexico and Texas.