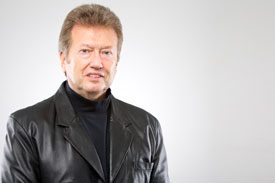 After retiring from a career in law enforcement with the Houston Police Department Professor Ferrell followed his heart and God’s calling and has come to HBU to help them start a Criminal Justice Program. Craig began his career as a patrol officer in 1977. While attending law school at the University of Houston, Craig quickly moved up the departmental ranks, becoming a Detective in 1983 and obtaining the rank of Sergeant in 1986. After graduating from the University of Houston Law Center in 1987, Craig continued his work for the citizens of Houston and was soon promoted to the office of Deputy Director and served as General Counsel for the Houston Police Department for his last 20 years with the Department.

During this time period, Craig gained valuable experience, not only as a manager, but as a trial lawyer. He was the First Chair litigator with responsibility for an average caseload of over 100 cases in County, District, and Federal Courts. His cases involved civil rights, auto accidents, premises liability, employment law and other general tort litigation.

Craig’s expertise in planning, managing, and improving complex programs involving thousands of employees and multi-million dollar budgets was soon noticed across the country. In 2005 Craig became General Counsel for the Major Cities Chiefs Association (MCC). MCC is a professional association of Police Chiefs and Sheriffs, representing the largest cities in the United States and Canada. As MCC’s General Counsel, Craig served over 76.5 million people with a sworn workforce of over 177,000 officers.

Professor Ferrell’s notoriety and expertise have made him a sought after speaker and teacher. He has taught police officers and law enforcement executives, both in Houston and throughout the U.S. and Canada. He has been an invited guest lecturer for the U.S. Department of State’s International Law Enforcement Academy and has addressed numerous State Bar and Law Enforcement seminars.

Before coming to HBU to help launch the Criminal Justice Program Craig also served as an Adjunct Criminal Justice Professor for Sam Houston State University teaching both undergraduate and graduate classes as well as serving as an Adjunct Professor of Government and Criminal Justice for Houston Community College. Professor Ferrell is a versatile educator and senior law enforcement executive with years of notable leadership serving over 20 years on the Houston Police Departments Command Staff. He has a keen ability to stimulate classroom discussion and student interaction which lead former Mayor of the City of Houston Lee P. Brown to say: “I commend HBU for the decision to establish a criminal justice program and choosing you (Craig Ferrell) to develop it.”

A. Articles in Peer-Reviewed Journals

B. Books, Reports, and Chapters – Reviewed and Edited

Ferrell, C. (October 2016). How to Best Utilize Videos to Protect Officers and Departments. In Major Cities Chiefs Association and the Federal Bureau of Investigation National Executive Institute Association, Officer Involved Shootings and the Implications of Video Evidence.  Retrieved from https://www.majorcitieschiefs.com/pdf/news/officer_involved_shootings_and_the_implications_of_video_evidence.pdf