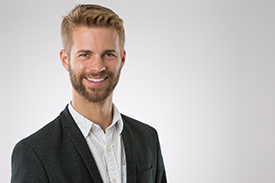 Professor Hartwell’s primary teaching focus is film production, directing, and writing. Prior to HBU, he served as an instructor with the Walt Disney Company, training and directing character performers in the Disney theme parks. In that role, he helped develop an international curriculum, collaborated extensively with management, oversaw schedules and logistics, and led over a hundred employees through the rigorous training program.

He has also been a guest columnist for The Hollywood Reporter and produced over 200 episodes of The Hart Beat, a film and television review series that he writes and hosts.

Active in filmmaking, Professor Hartwell has also written and directed short films and web series, garnering awards and honors. Working as a freelance videographer, he has captured events across the country, from large weddings to major entertainment conventions like Comic-Con and Star Wars Celebration.

When not working on his creative projects, he enjoys running, hiking, and exploring the outdoors with his wife.