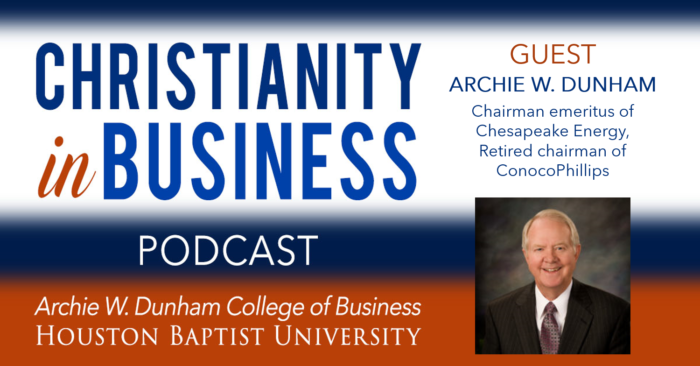 On this episode, we’re joined by Archie W. Dunham, who shares how his Christian faith impacted his leadership as the CEO/Chairman of two Fortune 500 companies.

Archie W. Dunham is chairman emeritus of Chesapeake Energy, the second largest natural gas producer in the United States and the retired chairman of the board of ConocoPhillips. He was instrumental in orchestrating Conoco’s IPO separation from DuPont in 1998, the largest in U.S. history at the time, and in negotiating the merger of equals between Conoco Inc. and Phillips in 2001 which created the third largest energy company in America and the fifth largest in the world.

In 1998, Dunham was recognized by the World Affairs Council as Houston’s International Citizen of the Year and inducted into the Oklahoma Hall of Fame. The most meaningful award he has ever received was being named Houston’s Father of the Year in 1998.

In addition to giving extravagantly to other worthy causes and organizations, the Dunhams have also been tremendously generous to Houston Baptist University which has resulted in various landmarks within the campus named in their honor that attest to their strong Christian faith and values, including the Dunham College of Business, Dunham Field, the Linda and Archie Dunham Theater and the Dunham Bible Museum.

It’s safe to say that the Christianity in Business Podcast may not exist if it wasn’t for Archie and Linda Dunham.