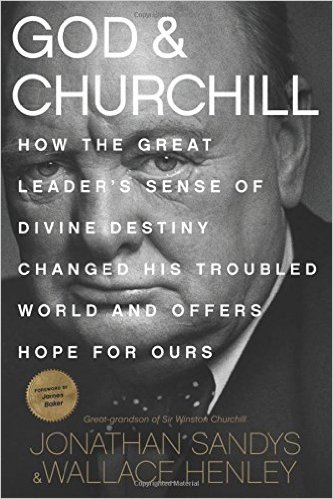 Jonathan said he wanted to write a book about Churchill and God. I had the privilege of being the co-author of the book, God and Churchill—the first spiritual biography of the great man.

In that research I discovered the story of our times as well.

Someone—perhaps Mark Twain—said that history may not repeat itself exactly, but it does rhyme. Those
who view time through the biblical worldview speak of “providential history”—time and events driven by the will of God. To my great surprise, I discovered this was Winston Churchill’s view. He believed that “Providence”—one of his favorite words, was guiding his every step to save “Christian Civilization,” as he put it several times.

And so one evening in 1891 16-year old Winston Churchill suddenly told his friend, Murland de Grasse Evans, “I can see vast changes coming over a now peaceful world; great upheavals, terrible struggles; wars such as one cannot imagine; and I tell you London will be in danger – London will be attacked and I shall be very prominent in the defence of London…”

A half century later, Churchill became Prime Minister barely a month before the Battle of Britain. “I felt as if I were walking with Destiny, and that all my past life had been but a preparation for this hour and for this trial,” he wrote later.

There is no doubt that God intervened in the desperate situation of the world seven decades ago through Winston Churchill. History in our age is rhyming amazingly with the history of Churchill’s day. The great question before us now: Does God have “Churchills” who will be His instruments in our moment?

As we view history through the lens of the Bible one of the major motifs is that of the Destroyer-Deliverer—culminating in the Apollyon-Beast and the Great Deliverer at the teleological climax of history, the Lord Jesus Christ. Until then, the theme maintains its rhyme across history.

The destroyers try to exploit historical circumstances for their own evil purposes. This is because history is the arena for the outworking and advance of God’s Kingdom in the world. (Matthew 24:14) Ultimately, the whole world, as seen from God’s perspective, will have an opportunity to know about the Kingdom of righteousness, peace, and joy in the Holy Spirit. (Romans 14:17)

That is the meaning of providential history, which Churchill sensed intuitively. He saw it working throughout his life, from his very childhood.

Churchill’s parents were immoral and neglectful. They sent young Winston and his brother, Jack, to boarding schools. This meant that the primary shaper of Churchill’s life was his nanny, Elizabeth Everest—a deeply committed Christian. She infused young Winston with the Bible and its worldview. Her impact was so powerful that he still had her photo in his bedroom when he died at 90.

Jonathan and I have not tried to make Churchill look like a pious man because he was not. He said he might not be a pillar of the church, but he was a “flying buttress.” However, he confessed to Field Marshal Montgomery that Jesus Christ was “unsurpassed” in his capacity to save sinners.

And Churchill loved the Bible. He wrote “that the most scientific view, the most up-to-date view and rationalistic conception, will find its fullest satisfaction in taking the Bible story literally.”

That faith stabilized Churchill during his times when it seemed the world was coming apart. And that brings us back to the reality of rhyming time.

Consider just a few things Churchill faced in his day and the similarities with our time:

Antichrist’s great aim is to impose his kingdom in the place of Christ’s Kingdom. In Churchill’s day the rival kingdom was Hitler’s Third Reich. In our day it is the Global Caliphate.

Internal forces that were antinomian and anti-civilizational

The Bloomsbury-Cambridge elites encouraged rejection of the very foundations of law and civilization on which British society rested. Today their counterparts are the Entertainment Establishment, Information Establishment, Academic Establishment, and Political Establishment.

A public consensus that was uninformed and naïve about the threats

Churchill found more understanding about the dangers of Hitler in Franklin Roosevelt than his own people. Many Americans and their institutions—including some churches—are blissfully unaware of the dangers to our Judeo-Christian civilization and constitutional order.

In 1933 as Hitler came to power, young scholars at Oxford University declared they would not go to war for king and country because there was nothing in their society worth dying for. Historian David McCullough spoke of our times when he said there is a “creeping disease eating away at the national memory,” resulting in our “losing our story, forgetting who we are and what it’s taken to come this far.”

It should not surprise us that Hitler’s biography, Mein Kampf, is enjoying new popularity in Europe, or that, in the words of Victor Davis Hanson, our leaders “are repeating the mistakes of their 1930s predecessors.

Jonathan and I seek to show how Churchill in his day offers guidance and even hope for ours.

Churchill told his people both the hard truth, and also comforted them with hope based on his view of providential history and God’s intervention. He energized the British people and their Allies with strong imagery and words, like these which apply to our times as much as they did his:

Arm yourselves, and be ye men (and women) of valour, and be in readiness for the conflict; for it is better for us to perish in battle than to look upon the outrage of our nation and our altar. As the Will of God is in Heaven, even so let it be.

Wallace Henley, senior associate pastor of Houston’s Second Baptist Church, is author of Globequake (Thomas Nelson/HarperCollins) and co-author with Jonathan Sandys of God and Churchill (Tyndale House Momentum in the US and SPCK in the UK, October 2015).