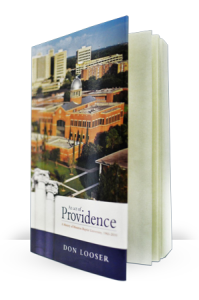 A history of HBU’s first 50 years, “An Act of Providence,” compiled and written by Vice President Emeritus Dr. Don Looser, is scheduled for fall publication by Halcyon Press. The volume traces the history of the University from its inception and chronicles the compelling story of God’s continuous blessing on HBU’s institutional development. The detailed narrative further documents the significant personal contributions of individual trustees, donors, faculty and staff, students and families, and the community-at-large toward the realization of the dream of the college founders. The year 2010 marked the 50th anniversary of the chartering of Houston Baptist College in 1960. Of the book, President Sloan wrote, “Don Looser was the perfect choice, having served 44 years in a variety of positions, capping his long and successful career as vice president for Academic Affairs. I knew no one else could bring the same degree of insider knowledge and expertise to the task of writing our history. Don Looser’s history of HBU has given me a greater sense still of the privilege I have to serve at this University in the city of Houston.”

The historical research consumed more than three years of concentrated activity drawing from the records of the Board of Trustees, student and University publications, letters and correspondence, minutes of meetings, newspaper and magazine reports, and the personal recollections of many who played pioneering roles. The 500-plus page volume features historical photographs and detailed rosters of the University’s organizational leadership. Fully referenced to source materials, the work stands as a foundation for documentation of the University’s future.

Publication of “An Act of Providence” marked the beginning of the University’s celebration of its 50th anniversary.