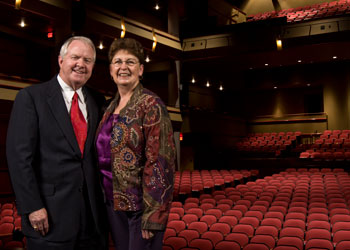 The Linda and Archie Dunham Theater in the Morris Cultural Arts Center on the University campus honors two longtime friends of HBU.

“Linda and Archie have made a significant impact on the life of HBU,” said President Sloan. “Their lives exemplify the values and mission of this University. Through their love and generosity, they have been strong supporters of our students, alumni, faculty, and staff. Their dedication to Christian higher education is evidenced both on the University campus and in the greater Houston community.”

As friends and benefactors of the University, the Dunhams have touched the campus through their generosity in a variety of ways. They are charter members of HBU’s Covenant Society. In 2001, they demonstrated their support for students with the establishment of an endowed leadership scholarship in honor of their son, Cary, a 1993 graduate of HBU. Upon Dunham’s retirement as chairman of ConocoPhillips in 2004, the corporation’s board donated $1 million to name the University’s Dunham Bible Museum in recognition of his service to the corporation and the community. The couple recently made a $1.25 million gift to the University to help secure a permanent collection of rare Bibles for the Dunham Bible Museum.

“Linda and I are honored to have this magnificent theater named after us,” said Dunham. “Houston Baptist University is doing a wonderful job of providing a Christian-based education to students from nearly every continent. We are happy that we can contribute to the success of the University.”

An honorary Doctor of Humane Letters degree was presented to Archie Dunham in 2003 in recognition of his outstanding leadership and service to the University.

Linda Dunham is an active member of The Guild, a group of civic-minded Christian women of many denominations who are dedicated to fulfilling a unique role in the growth and development of the University, especially through the funding of graduate education scholarships. She also serves on the board of the Oldham Little Church Foundation, which distributes funds to small churches throughout the United States in need of financial support. Linda is also an active member of the CEO Spouse Forum, a group of Christian CEO spouses.

The theater, which has 46,000 square feet and seats 1,200, has received rave reviews for its acoustical performance since it opened in 2007.