About Mary Ann and Bruce Belin 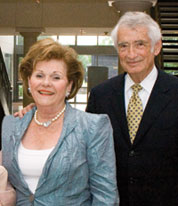 The Belin Chapel and Recital Hall, named in honor of Mary Ann and Dr. J. Bruce Belin, offers the first on-campus space dedicated to worship and helps commemorate more than 40 years of faithful service and leadership at the University. Dr. Belin, who passed away in May 2011, was an HBU trustee and former chair who played a vital role in the growth and vision of HBU. He also served on the board of the Cullen Trust for Higher Education and was chair of the Cultural Arts Center Building Committee. Belin first became involved with HBU at the request of his good friend Stewart Morris. He was appointed to the University’s Board of Trustees in 1967 and was one of the original members of the President’s Development Council. As president of Belin and Associates he developed some of the most high profile master-planned communities in the Houston area, including Bentwater on Lake Conroe, April Sound, and Pecan Grove Plantation.

Belin grew up near Independence, Texas. He attended Texas A&M University and served in the U.S. Navy during World War II before beginning his professional career some 50 years ago. He loved horses and spent most of his free time at his ranch near Boerne, Texas. Belin’s personal and professional lives went hand-in-hand. “Mary Ann and I have always been very involved in starting churches and this new Chapel is going to be very special,” Belin said. Belin’s Christian faith played an important role in his life. In fact, it touched every community he ever developed. Some 20 years ago, Belin and his wife started the Belin Foundation, which is dedicated to helping start new churches.

The foundation has created a Baptist church within each one of Belin and Associates’ master-planned communities. Mary Ann Belin has also played an active role in the life of the University. She is a member of the HBU Guild and served as its president in 1990. “HBU is close to our hearts because of its Christian-based education. I think in today’s world we need our values held, we need to be conservative, and we need to educate our children to respect authority and their families. This university does that,” Mary Ann Belin said. In addition to his wife, Bruce Belin is survived by two children, Laurie Mahlmann and Greg Belin, and six grandchildren.

A large portion of the funding for the building was provided by the Cullen Trust for Higher Education, which made its first gift to HBU in 1983.  “For more than twenty years, the Cullen Trust for Higher Education has supported HBU in the belief that the University plays a key role in preparing our region’s college students for a productive future,” said Corbin J. Robertson, chairman of the board.